This temple is one of the prominent temples and also one of the richest temples in the world. The ancient and sacred temple of Sri Venkateswara is located on the seventh peak which is called as Venkata Hill. This lies on the southern banks of Sri Swami Pushkarini.

The Sri Venkateswara Temple, at Tirupathi, Andhra Pradesh, has gained a unique sanctity in India. It has been said that one can attain mukti by going to the temple. In the Rig Veda and Asthadasa Puranas, the benefits of pilgrimage to Venkatachala are mentioned. In these epics, Sri Venkateswara is described as giver of boons and there are several legends associated with the Lord at Tirumala.
The temple has its origins in Vaishnavism. This community advocates the principles of equality and love. It also prohibits animal sacrifice. 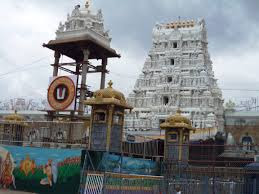 All the great dynasties of rulers in the south have prayed to Lord Sri Venkateswara in this ancient shrine. These include the kings of The Pallavas of Kancheepuram (9th century AD), the Cholas of Thanjavur (a century later), the Pandyas of Madurai, and the kings and chieftains of Vijayanagar (14th - 15th century AD). These people were devotees of the Lord. These people also competed with one another for offering their wealth to the temple. There is a statue of Venkatapati Raya in the main temple apart from other statues.

After the decline of the Vijayanagar dynasty, people still continued to visit the temple often. The Maratha general, Raghoji Bhonsle, visited the temple. He also set up a permanent endowment for worshipping in the temple. Apart from that, he also presented valuable jewels to the Lord. This included a large emerald which is still maintained in a box named after the General. After that, rulers from Mysore and Gadwal have contributed a lot to the temple.
After the fall of the Hindu kingdoms, there were some Muslim rulers of Karnataka after which the Britishers took over supervising the temples.

In the time of 1843 AD, the East India Company divested itself. This was from the direct management of non-Christian places of worship. This also included native religious institutions. After that happened, the administration of the shrine of Sri Venkateswara and a number of estates were entrusted to Sri Seva Dossji of the Hatiramji Mutt at Tirumala. The temple remained under the administration of the Mahants till 1933 AD.

In the year 1933, the Madras Legislature passed a special act. This made Tirumala Tirupati Devasthanams(TTD) Committee to control and administer a fixed group of temples in the Tirumala-Tirupati area. This was done through a Commissioner appointed by the Government of Madras.
In the year 1951, the Act of 1933 was replaced by an enactment. Here the administration of TTD was entrusted to a Board of Trustees. After that, an Executive Officer was appointed by the Government .