Ratha Yatra  ( Hindi - रथ यात्रा, Bengali - রাথ যাত্রা) is a Hindu festival that involves moving deities GOD Jagannath, Balabhadra, Subhadra and Sudarshana on a chariot. In Sanskrit, Ratha means "chariot", and Yatra means "journey"; the festival usually involves an annual procession of a deity's idols.
Mainly this festival organized each year at famous Jagannatha temple in Puri yeach year at famous Jagannatha temple in Puri. Ratha Yatra day is decided based on Hindu Lunar calendar and it is fixed on Dwitiya Tithi during Shukla Paksha of Ashada month. Currently it falls in month of June or July in Gregorian calendar. 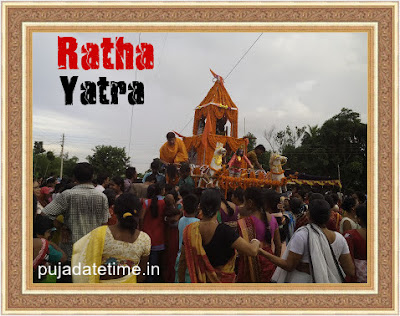