2021 · 2021 Puja Date · Shigmotsav Date & Time
Shigmo or Sigmo is a Spring time festival celebrated in Goa, India.
Also called as Shigmotsav, this festival is the Goan version of Holi Festival and is celebrated with great fervor by the Hindu communities throughout Goa.

Time & Duration: Shigmo is celebrated in the Phalgun Month of Shaka Hindu Calendar. The celebrations last for almost a fortnight. 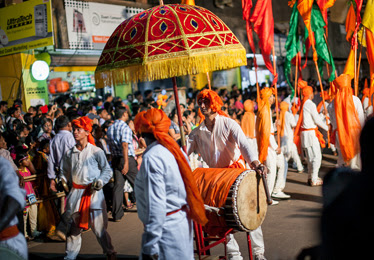 Dhakto Shigmo (Small Shigmo): This variation of Shigmo is celebrated by the farmers and agriculturists in rural areas or Goa. It commences five days prior to the first full-moon day in the month of Phalgun and ends on the full-moon day.

This variation of Shigmo festival is celebrated by all the classes.
Unlike the Dakhto Shigmo, the Voldo Shigmo takes up from where the Dakhto had left off.
Celebrated mainly in the New Conquests areas of Goa, the Vodlo Shigmo starts with the Holi Purnima, that is on the full-moon day of the month of Phalgun (March)  and beginning on the 9th moon day to the full moon day.

Processions & Parades: Goan People celebrate Shigmo by organizing large fairs and processions or Yatras from major temples throughout Goa.
The processions begin with brass bands followed by folk dancers in traditional dresses dancing to the beats of drums.
Devotees also prepare tableuxs dedicated to Gods and Godesses in addition to the decorated Umbrellas representing various deities.
The procession culminates in a line of illuminated floats atop which larger-than life mechanical figures represent important deities and some even re-enact their heroic deeds.