2017 Puja Date · Bolla kali Puja Date
About Bolla Kali: The village Bolla is situated 20 km away from Balurghat town on the Balurghat- Malda Highway. There is a famous Kali temple named after BOLLA Ma Kali (Bengali: শ্রী শ্রী মা বোল্লা কালী মাতা, बोलला काली माता ). The story behind the temple says that a Zamindar was arrested by the British as he could not pay the tax for his Zamindari. Goddess Kali came to his rescue and the Zamindar was freed the very next day. As a token of gratitude, he built a temple of Goddess Kali and started worshipping her.

Since the Zamindar was released on a Friday that followed the Rash Purnima and so on every Friday after the Rash Purnima, Kali Puja is celebrated in the temple. A sea of devotees, from different parts of South Dinajpur district, gathers in the temple during the Puja and offer prayers. A three day fair is organized by the Puja committee on this occasion. Animal sacrifice, also known as Bali, is also a prominent feature of this Puja.[source: kmdinfo] 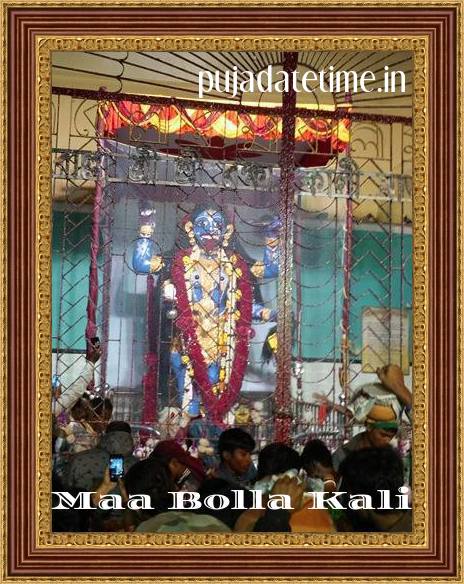