2017 Puja Date · Kartik Puja Date · Kartikeya Puja Date
About Kartik Puja: Kartikeya also known as Kartik, Kartika or Kartik Thakur, is also worshipped in West Bengal, and Bangladesh on the last day of the Hindu month of Kartik. He is the Lord of male-fertility and good harvest. He is portrayed as a handsome with bow and arrow in hand.Kartikeya is primarily worshipped among those who intend to have a son. In Bengal, traditionally, many people drop images of Kartik inside the boundaries of different households, who all are either newly married, or else, intend to get a son to carry on with their ancestry. Kartik is also associated to the Babu Culture prevailed in historic Kolkata, and hence, many traditional old Bengali paintings still show Kartik dressed in traditional Bengali style. Also, in some parts of West Bengal, Kartik is traditionally worshipped by the descendants of the past royal families too, as in the district of Malda. In Bansberia (Hooghly district) Kartik Puja festival is celebrated like Durga puja for consecutive four days. The festival starts on 17 November every year and on 16 November in case of Leap year. [Source:Wikipedia] 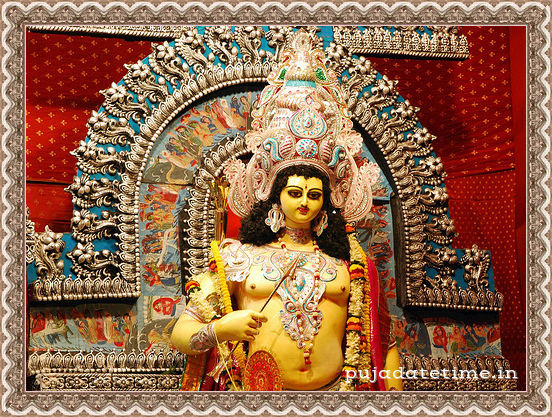