108 Names · Devi Durga · Devi Durga 108 Names
Durga Puja ( দুর্গা পূজা )  is the one of the most famous and festival celebrated in  Bengali Hindu religions ( West Bengal, Bangladesh and particularly in Kolkata), in honor of Goddess Durga during the period of Navaratri. Durga Puja is also known as Durgotsava (দুর্গা উৎসব), Saratutsabh (শারদ উৎসব). It is celebrated for 10 days, however starting from the sixth day till the ninth day (Shashthi, Maha Saptami, Maha Ashtami, Maha Navami and Vijayadashami), the Pandals with grand idols of Goddess Durga are open for visitors. 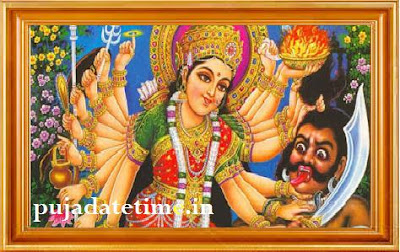 Goddess Durga is known by 108 different names. Here are the 108 names of Devi Durga with English Meaning. These names of Maa Durga is recited to bring an end to all difficulties in one’s life.
[ Ashtottara Shatanamavali of Goddess Durga (মা দুর্গার ১০৮ নাম),मां दुर्गा के 108 नाम, Maa Durga 108 Nemes with Meaning]