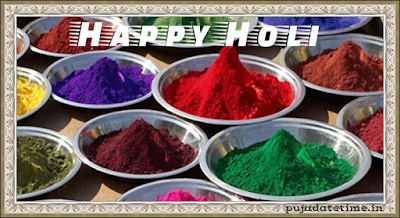 From Wikipedia: Holi is a Hindu spring festival in India and Nepal, also known as the "festival of colours" or the "festival of love".The festival signifies the victory of good over evil, the arrival of spring, end of winter, and for many a festive day to meet others, play and laugh, forget and forgive, and repair broken relationships, and is also celebrated as a thanksgiving for a good harvest.[9][10] It lasts for two days starting on the Purnima (Full Moon day) falling in the Bikram Sambat Hindu Calendar month of Falgun, which falls somewhere between the end of February and the middle of March in the Gregorian calendar. The first day is known as Holika Dahan (हॊलिका दहन) or Chhoti Holi and the second as Rangwali Holi, Dhuleti, Dhulandi or Dhulivandan.