About Bipottarini Brata: Popularly known as Bipattarini (Bipottarini), also termed as Bipodtarini or Bipadtarini is a Hindu goddess (Devi), worshipped in West Bengal, Orissa and surrounding areas. Closely associated with goddess Sankattarani and considered as one of the 108 Avatars of the goddess Durga, Bidaptarini is especially prayed to for help in overcoming troubles.  Her legends which are recounted during the annual festival associated with her, the Bipadtarini Vrata, observed by women, on the Bitween Dwitiya (Ratha Yatra) to Dashami {(Ulta Ratha Yatra ) or (Bahuda Jatra)} or Bitween 2nd day to 10th Day of the Shukla paksha (waxing moon) Tuseday or Sutarday in month of Ashada according to the Hindu Calendar. Her legends established her name, Bipada – Tarini, which literally means deliverer from troubles. Source: Wikipedia]

Bipattarini Puja 2018 dates are July 17. The Brata is observed on Tuesday in the month of Ashar in Bengal after Rath Yatra and before Ulto Rath. 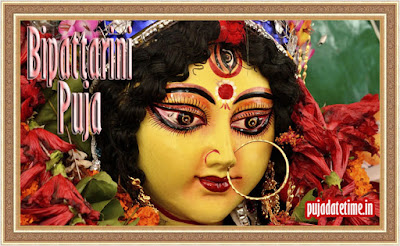