Ēkādaśī ("Eleven"), also spelled as Ēkādaśi, is the eleventh lunar day (tithi) of each of the two lunar phases which occur in a Hindu calendar month - the Shukla Pakṣa (the period of the brightening moon also known as the waxing phase) and the Kṛṣṇa Pakṣa (the period of the fading moon also known as the waning phase).[citation needed]

In Hinduism and Jainism, Ekādaśī is considered a spiritual day and is usually observed by partial fast. Beans and grains are not consumed by observant people during because they are believed to be contaminated by sin. Instead, only fruit, vegetables, and milk products are eaten. This period of abstinence starts from sunrise on the day of Ekādaśī to sunset on the following day. Rice is not eaten on Ekadashi.

The timing of each Ekādaśī is according to the position of the moon. The Hindu calendar marks progression from a full moon to a new moon as divided into fifteen equal arcs. Each arc measures one lunar day, called a tithi. The time it takes the moon to traverse a particular distance is the length of that lunar day. Ekādaśī refers to the 11th tithi, or lunar day. The eleventh tithi corresponds to a precise phase of the waxing and waning moon. In the bright half of the lunar month, the moon will appear roughly 3/4 full on Ekādaśī, and in the dark half of the lunar month, the moon will be about 3/4 dark on Ekādaśī. 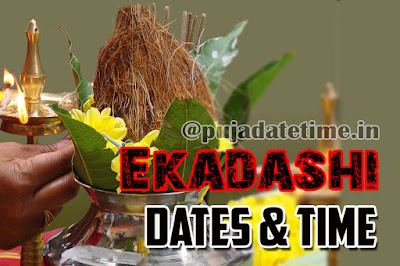 There are usually 24 Ekādaśīs in a calendar year. Occasionally, there are two extra Ekādaśīs that happen in a leap year. Each Ekādaśī day is purported to have particular benefits and blessings that are attained by the performance of specific activities.Source- Wikipedia